Sarah is a passionate kombucha brewer and she wants YOU to be one too! Learn how to make your very own kombucha at home with a few grocery store ingredients and simple equipment. Save money! Connect with your food! Experiment and have fun! All aboard the kombucha train…brew brew!

How hard could it be? Well, there are some tricks to what seems to be a perfect pairing. Come taste for yourself!

Join Ben and Zab as they man the grill, showcasing simple steps to ensure you become the talk of the town after your next backyard BBQ.

In this workshop children, and their parents, will be introduced to Mindful Eating through an engaging lesson based on the book 'The Very Hungry Caterpillar' by Eric Carle. Following a reading of the book, participants will be guided through a Mindful Eating exercise where they will learn to mindfully eat raisins. The children will then have some time to colour in a Hungry Caterpillar activity sheet while their parents will be engaged in a discussion about how to incorporate Mindful Eating into their daily routines.

Stay cozy as you learn the fundamentals of the perfect risotto, nestled in next to natures sweet roots.

Whole foods, whole paycheck, hold up! Learn the basically of butchering chicken and fish and keep a ton of money in your pocket while you're at it!

Join Sarah for a delicious workshop with summer soups. Enjoy the season’s harvest with three different recipes that you can whip up on a busy weeknight, or savour on a slow weekend afternoon. Simple ingredients, helpful techniques, and quick tips will inspire you get these tasty and nourishing soups on the table for you and your family to savour for years to come!

Want to take incredible food photos with your phone, but don’t know where to start?! Sarah Britton, the creator of My New Roots, has built a large social media following based on her colourful and inspiring food photos – all taken without a professional camera! Come and improve your skills with easy-to-implement tips & tricks, basic editing, and helpful apps. This class is perfect for beginners, or anyone who wants to improve their food photo skills!

Rodney ran a successful Meatball restaurant in Toronto with three locations. Today, he shares his secrets.

A World of Chocolate

Master of eggs, Albert Ponzo, returns to Cultivate to show the people how to make the perfect Eggs Benedict. Don't miss out!

Learn how to use indigenous ingredients in everyday cooking, celebrating the land and all it has to offer.

Kate has cooked for .... and wrote a cookbook for Blue Rodeo. Now she's making fritters for you! A certified holistic nutritionist, plant-based chef, and cookbook author, Sarah Britton is the creative force behind MY NEW ROOTS, the award-winning blog that has become an online destination for foodies everywhere, not only for its one-of-a-kind recipes, but also for its in-depth nutritional information and mouth-watering photography. Sarah has recently moved back to Canada from Copenhagen, Denmark, where she worked as a chef in several prominent restaurants. Her focus now is to inspire people to get back into their kitchens, and reclaim their health through the power of whole foods. 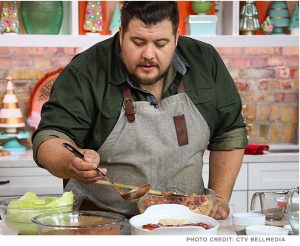 Rodney Bowers shares his culinary skills regularly on THE MARILYN DENIS SHOW as the daytime series’ latest cooking expert, a position he won after he successfully completed MARILYN’s “Search for the Next Cooking Expert” in March 2014. The nation-wide search followed six incredibly skilled cooks from across Canada, as they battled it out in a week-long series of intense culinary challenges on live television.

Growing up in Grand Falls, Newfoundland, and being born into two large families full of bakers and professional cooks, Rodney was always surrounded with good comfort food. After his father joined the Military and moved the family around the world, Rodney began helping out in the family in kitchen, as his mother was always at the restaurant.

Rodney got his first job in the business at the age of 13 – in a local pizzeria. He hopped from one opportunity to another, moving from Newfoundland to Germany, Belgium, England, New York, and Connecticut, before ending up in Toronto.

In just a few years, Rodney rose from Entremetier in the Toronto kitchens of North 44 Canoe, to junior Sous Chef at the Four Seasons Hotel with Lynn Crawford, and Restaurant Chef at Massimo Capra’s Mistura.

In 2005, he opened his own restaurant The Rosebud, which was quickly acclaimed as one of Toronto’s top eateries. His other former bistro The Citizen, in Toronto’s Leslieville, also garnered rave reviews.

Rodney opened Hey Meatball! in 2011, as a quick simple family restaurant where parents don’t have to worry about the horrors of the fast food industry. It established a trend with being the first ever farm-to-table restaurant, serving quick service style food in Canada.
Rodney also appears as a regular guest chef on CANADA AM. He has also appeared on TRIPLE D and hosted THE DELINQUENT GOURMET. Rodney’s combination of kitchen skills, ability to connect food with people, business sense, charm, and competitive perseverance has catapulted him from cook to culinary master at the forefront of Toronto’s culinary scene. 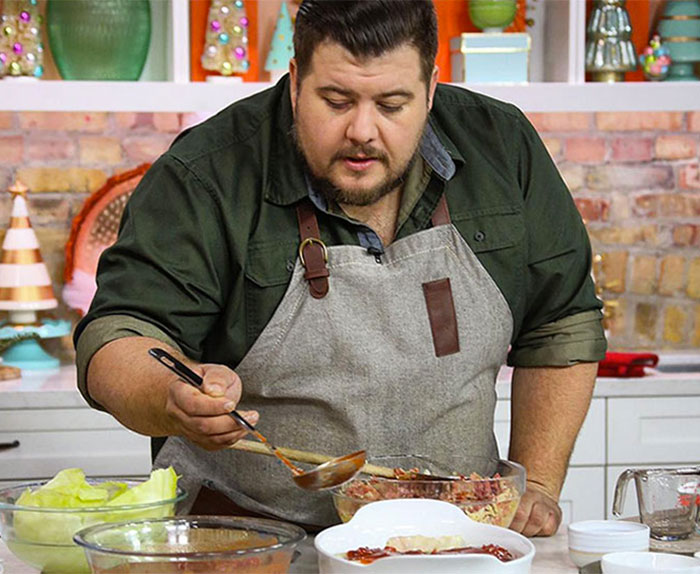 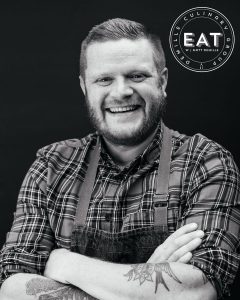 Matt DeMille grew up in rural Ontario, surrounded by a bounty of locally grown food, before farm-to-table was cool. Inspired by his French Canadian roots and the comfort food that filled his childhood memories, he knew at an early age that the kitchen was his calling. He completed Chef Training at George Brown College in Toronto and was hooked on the big city and it’s dining scene.

His first culinary job was with the Oliver Bonicini Group and he credits that with increasing his awareness of local food and wine. Matt has completed stints at renowned restaurants LeSelect Bistro, Enoteca Sociale and Parts & Labour, where he grew creatively and honed his love for Canadian-inspired comfort food.

Yearning for a simpler life, Matt made the move to Prince Edward County with his small family. Having grown up in the region, he helped to put Wellington on the food map as chef at PEC restaurant Pomodoro. In the late summer of 2014 he opened the widely acclaimed Drake Devonshire Inn, snagging a spot on Canada’s Best Restaurants List, 2016.

In 2017 he launched a small, in-house, interactive dining program that brings the best of PEC into your home. 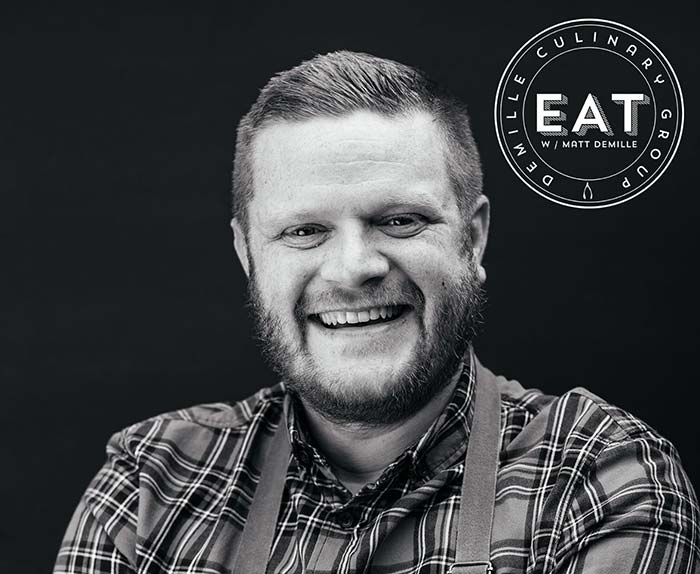 Chef Shawana is Odawa, part of the Three Fires Confederacy. Born and raised in Wikwemikong Unceded Indian Reserve located on Manitoulin Island in Ontario, Joseph was brought up knowing that food is life. Having 6 brothers and 6 sisters, and being the oldest male, he paid a lot of attention to his mother while she was cooking, who she learned from his grandmother and great grandmother. Since starting in the kitchen when he was 13, he knew that the chef life was for him. He graduated with honours from culinary school, and everyday that passes his passion for food grows more and more. Trained in classical french, and with his Aboriginal background, he cooking infuses Classical French techniques with Native American Cuisine. Full of flavour and never compromising quality over quantity. Joseph started a program to help young youth to come into his kitchens and work alongside the chefs and teach them the culinary field in every aspect. Chef Joseph Shawana, the force behind a new high-end Indigenous restaurant in Toronto, where he experiments with traditional Indigenous ingredients, many of them wild, including fir tips, sweetgrass and seal. 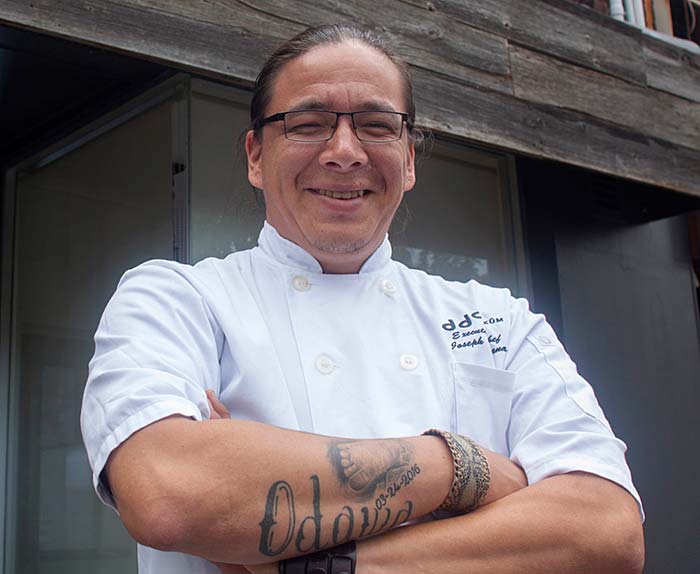 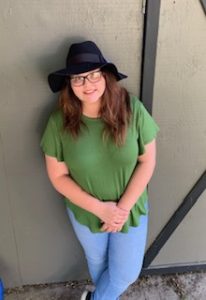 Her passion for cooking stems from cooking for her large family and spending time with her mother by sharing their love for watching different cooking shows before she went to college. 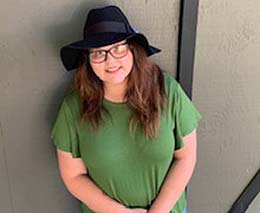 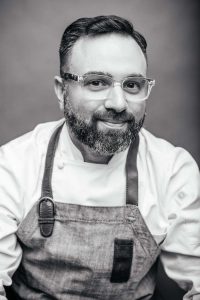 Albert Ponzo is the Executive Chef of The Royal Hotel in Picton, Ontario, Canada. The historic Royal Hotel has been under re-construction for the past two years and will re-open in 2019.

Albert brings over two decades of food knowledge and experience in sustainable farming and nose-to-tail eating. With a passion for working closely with nature, and sourcing ingredients ethically produced in a sustainable manner, Albert strives to prepare farm-driven food with the best seasonal local ingredients at their ripest time.

Prior to joining The Royal, Albert served as Executive Chef at Toronto's iconic Le Sélect Bistro, where he was the creative force behind the restaurant’s contemporary rendition of classic French cuisine. He is a strong supporter of SlowFood Toronto and has received numerous awards, including:  2015 Winner of Toronto’s Cochon 555 Heritage BBQ, 2014 Awarded Fellow of the Ontario Hostelry Institute and 2012 Winner of Ocean Wise Toronto Chowder Chowdown. He has also worked at celebrated Toronto restaurants Canoe and Crush Wine Bar.

In his spare time, Albert enjoys teaching nose-to-tail butchery and collaborating with other chefs internationally. He also volunteers with organizations focused on food education and sustainability. Supporting the work of the Community Food Hub, Second Harvest Food Bank, The Stop (Community Food Centres), The Child Development Institute and many others. 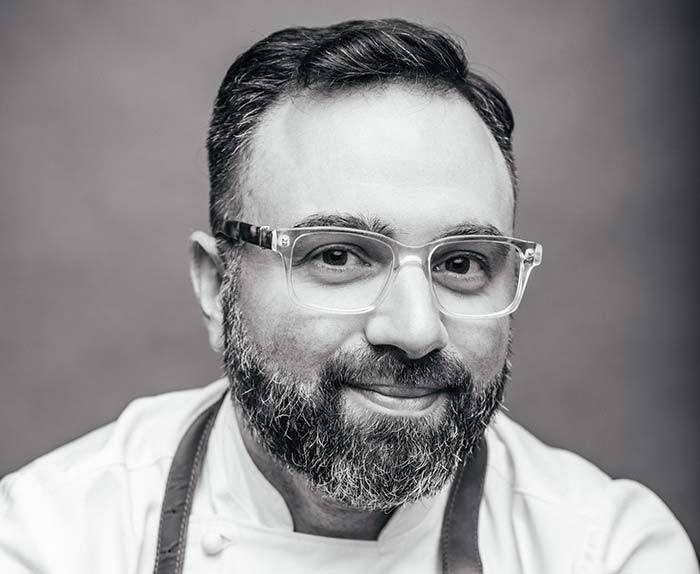